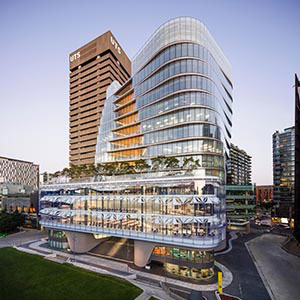 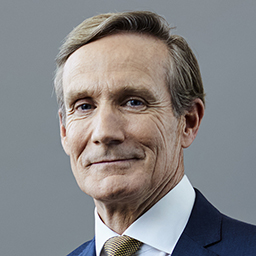 A Vertical Campus for Student Engagement

Because of its location on the fringe of Sydney’s central business district, horizontal space was at a premium for University of Technology Sydney (UTS), which introduced significant limitations as to how the campus could grow and expand. The solution to the university’s space woes was found in building a vertical campus that linked the city with the school’s facilities and provided permeability between the academic community and the urban fabric, allowing students to take advantage of Australia’s biggest metropolis. The new vertical campus (CB02) is located adjacent to the existing UTS Tower (CB01), with the lower podium levels connected at grade, significantly increasing the scale of the existing internal campus of CB01.

The newest tower (CB02) was developed as two parts, each with distinct geometries. The oblong podium integrates with the immediate street context at Broadway, echoing the city’s layout, and creating a legible connection to the only green part of the campus via the Alumni Green. The upper portion of the tower, which rests atop the podium, features gently staggered, rotating floor plates that decrease in size as the tower increases in height. Extensive consultation and faculty engagement led to the development of the campus’ space types, including group study rooms and a central student hub, as well as two 350-person and one 200-person General Teaching Spaces (GTS), which enhance interaction through tiered collaborative layouts. The podium structure allows students and staff the opportunity to easily travel between towers, the campus, and the Alumni Green, connecting teaching and learning areas with various faculties, the UTS Central Library and Reading Room, and the informal learning spaces that form the nexus of the university’s learning philosophy.